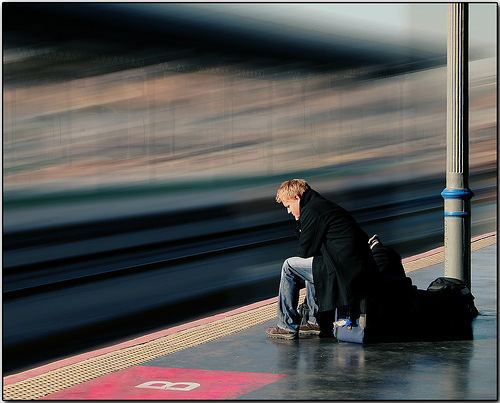 Such things were written in the Scriptures long ago to teach us. And the Scriptures give us hope and encouragement as we wait patiently for God’s promises to be fulfilled. Romans 15:4 NLT

A friend of mine who had recently relocated to another country, was seeking for a job in order to also relocate his family. Being alone for some time and going from job interview to job interview with no results to show, had started to make his uneasiness grow. Not that he had been idle, in fact he was getting up early every day and doing his part. He had made a plan and put it to action, counted his resources, and made provision. For him, this was a move like no other one he had done before. Him moving was not prompted by his desire, but he was certain that it was directed by The Master. He had a promise, and God always fulfills his promises.

So why he had not seen any results? No offers, no glimmer of hope. While he was being faithful and waited, his available resources were being depleted. He had calculated the time it would take exhaust them, and that time was close. And then his wife told him that she was also “all in”, and went on to quit her job and told him so. God had given them a promise and she believed it.

One of those “waiting days”, we had the chance to chat early in the morning and this issue came up. We exchanged some comments and then he said, “I’m waiting, waiting”. I could sense some frustration about the process in his comments, so I reminded him about this scripture, “…as we wait patiently…”.

Paul exhorted the Romans as to how to live and care for those that were among them. Had been telling them how to conduct themselves and why and apparently there were some among them that had been having some trouble and their patience was running slim when it came to considering their brothers and encouraging them. Then this verse comes in the middle of all his instructions and summarizes his teaching and seals the truth about God’s character. God cannot die, lie, be fooled or stop loving us.

Everything that is written in the scriptures is there to give us hope and encouragement, while we wait for the promises of God to be fulfilled in our life and on the lives of those around us. Paul with this verse is stating that the promises of God are not to be doubted or questioned, but to be expected. We live on promises not explanations. Just as the romans had troubles, tribulations and issues, we have our share of situations, but no situation will ever be as tangible as promise made by God.

Back to my friend. Just a couple of days later he received not one, but several job offers at the same time, and his problem now was to decide which one to accept. At the time of this writing, his family is traveling to meet him, their promise came to pass and their new journey begins.

Do not despair, do not be anxious, his promises are true and while we wait we should delve into his word to be filled with hope, encouragement and instruction. They were written long time ago to prepare you for your next assignment, and the process will help you grow into the man and women that God intended you to be. And all of this will happen, while we wait.

I love to inspire people to Breathe expectantly, to Live confidently and to Move boldly. I love coffee. Husband and father. Hungry for God's presence and awed by His unfailing and undeserved Love for me! Did I say that I love coffee?
View all posts by Danny Maldonado →
This entry was posted in Decisions, English, Obedience, Paciencia, Promises and tagged Decisions, English, Obedience, Paciencia, Patience, Promises. Bookmark the permalink.